You are here: Home1 / Blog2 / Missional Church3 / Toward Missional Clarity

[featured_image]Here is a simple explanation of the word missional—it describes being a missionary everywhere you are! It is about doing missions—aligning your life with the redemptive mission of Jesus in the world. It includes adopting the posture of a missionary in order to engage those in the culture around you with the gospel message. It is based on the recognition that every believer has been sent by Jesus as Christian missionaries with the good news of salvation together in community with other believers to their specific geographic and cultural context. Just as God sent Jesus, Jesus sends all believers (John 20:21).

The word missional is an adjective that describes the way in which Christians do all activities, rather than identifying any one particular activity. Everything missional is directed toward participation in God’s mission in the world.

Missional then, no matter what noun it is modifying, must qualify the meaning of that noun by referencing God’s mission as defined by Scripture. More specifically, missional limits any noun that it modifies to the temporary mission task of the Church to make disciples of all ta ethne for God’s glory and worship Therefore, a local church is missional when it intentionally pursues God’s mission for His glory among all peoples by following His patterns and His ways of expanding His kingdom. (Van Sanders, “The Mission of God and the Local Church,” in Pursuing the Mission of God in Church Planting, ed. John M. Bailey, Apharetta: North American Mission Board, 2006, 25).

The term missional is rooted in the missio Dei, which means “the sending of God” in Latin. In 1934, Karl Hartenstein, a German missiologist, coined the phrase in response to Karl Barth and his emphasis on actio Dei (Latin for “the action of God”).

When kept in the context of the Scriptures, missio Dei correctly emphasizes that God is the initiator of His mission to redeem through the Church a special people for Himself from all of the peoples (ta ethne) of the world. He sent His Son for this purpose and He sends the Church into the world with the message of the gospel for the same purpose. (Ibid, 24).

Mission is not primarily an activity of the Church, but an attribute of God. God is a missionary God.

“It is not the church that has a mission of salvation to fulfill in the world; it is the mission of the Son and the Spirit through the Father that includes the church.” (Jurgen Moltmann. The Church in the Power of the Spirit: A Contribution to Messianic Ecclesiology, London: SCM Press, 1977, 64; quoted in David J. Bosch, Transforming Mission, 390.)

The Church must not think its role is identical to the missio Dei; the Church is participating in the mission of God. 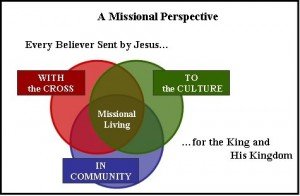 Jesus said, “As the Father has sent Me, I am sending you” (John 20:21). Every believer is sent by Jesus with the gospel together in community to those in the surrounding culture. “The essence of any church is its mission. The essence of God’s mission is extravagant love, which Jesus Christ communicated and displayed for us on the cross.” (Tom Clegg and Warren Bird, Lost in America: How You and Your Church Can Impact the World Next Door, Loveland: Group Publishing, 2001, 20.)

David Bosch has written the most comprehensive study of Christian mission. His book, Transforming Mission is a must read for anyone seeking to understand the mission of God and the Church’s role in fulfilling that mission.

During the past half a century or so there has been a subtle but nevertheless decisive shift toward understanding mission as God’s mission. During preceding centuries mission was understood in a variety of ways. Sometimes it was interpreted primarily in soteriological terms: as saving individuals from eternal damnation. Or it was understood in cultural terms: as introducing people from East and the South to the blessings and privileges of the Christian West. Often it was perceived in ecclesiastical categories: as the expansion of the church (or of a specific denomination). Sometimes it was defined salvation-historically: as the process by which the world—evolutionary or by means of a cataclysmic event—would be transformed into the kingdom of God. In all these instances, and in various, frequently conflicting ways, the intrinsic interrelationship between christology, soteriology, and the doctrine of the Trinity, so important for the early church, was gradually displaced by one of several versions of the doctrine of grace.

Mission was understood as being derived from the very nature of God. It was thus put in the context of the doctrine of the Trinity, not of ecclesiology or soteriology. The classical doctrine on the missio Dei as God the Father sending the Son, and God the Father and the Son sending the Spirit was expanded to include yet another “movement”: The Father, Son and the Holy Spirit sending the church into the world. As far as missionary thinking was concerned, this linking with the doctrine of the Trinity constituted an important innovation.

Our mission has not life of its own: only in the hands of the sending God can it truly be called mission. Not least since the missionary initiative comes from God alone.
Mission is thereby seen as a movement from God to the world; the church is viewed as an instrument for that mission. There is church because there is mission, not vice versa. To participate in mission is to participate in the movement of God’s love toward people, since God is a fountain of sending love. (David J. Bosch, Transforming Mission, Maryknoll: Orbis Books, 1991, 389–390).

The Bible is clear that “the end result of such missio Dei is the glorification of the Father, Son, and Holy Spirit.” (George Peters, A Biblical Theology of Missions, Chicago: Moody Press, 1972, 9.)

Jesus was a missionary. This application of the term missionary may sound strange, but Jesus exemplifies in the truest sense what it means to be a missionary. Most Christians understand that a missionary is one who has been sent with the gospel to a foreign people to lead them to faith in Christ and among other things, multiply disciples, and establish churches. Jesus was sent to earth by the Father with the gospel. He was not sent “to condemn the world, bur rather that the world through Him might be saved” (John 3:17). He proclaimed the gospel, He made disciples, and He established His Church. Then, He sent His followers as missionaries with the gospel to Jerusalem, Judea and Samaria, and to the ends of the earth (Acts 1:8). He commanded them to make disciples, to baptize, and to teach all that He commanded (Matt 28:19–20). Jesus initiated a missionary movement! Every follower of Jesus instantly became a missionary—sent with the gospel message.

The Great Commission was not the first announcement regarding His mission that Jesus made. He made several statements during His earthly ministry that are recorded in the Gospels. “Each statement carries a nuance of its own yet supports, rather than displaces, the redemptive nature of the Great Commission.” (John Edmund Kaiser, Winning on Purpose, Nashville: Abingdon Press, 2006, 55.)

Dr. Ray Bakke has observed that many people try to make conversion the logical and chronological priority over all other mission statements that Jesus made. He warns that there is a danger of establishing a canon within a canon or a red letter edition of priority that Jesus did not make. When anyone prioritizes salvation as the highest mission, they create a hierarchy where the evangelist is the most important role in vocational ministry. However, the call of the evangelist is only one of the gifts given to the Church; there are also apostles, prophets, pastors, and teachers.

Bakke concludes that Jesus’ mission as stated in His first sermon in Luke 4:18–19, should never be the enemy of His last sermon in Matthew 28:19–20. In other words, to “preach the gospel to the poor to proclaim release to the captives to set free those who are downtrodden” is not less of a priority than the Great Commission to make disciples. Since the Great Commission includes Jesus’ instruction: “teaching to observe all that I commanded you,” it certainly includes Jesus’ mission in Luke 4 which is targeted toward the poor, captives, and downtrodden.

In evaluating Jesus’ mission, one must observe the pattern of Jesus. As He traveled among the villages, He trained His disciples to do what He was doing. Yet when He left, He summed up the mission He was giving to His disciples in the Great Commission in Matthew 28; that commission to make more and better disciples remains the mission of the Church today. “The object is not to find them, gather them, or improve them. The object is to make them.” (John Edmund Kaiser, Winning on Purpose, 59.)

The term missional is all about being a missionary everywhere you are! It is about doing “missions” by aligning your life with the redemptive mission of Jesus in the world. It is adopting the posture of a missionary in order to engage those in the culture with the gospel message.

Being missional is rooted in the missio Dei. Mission is not primarily an activity of the Church, but an attribute of God. God is a missionary God. “The Church is sent into the world to continue that which he came to do, in the power of the same Spirit, reconciling people to God.” (Lesslie Newbigin, The Gospel in a Pluralist Society, Grand Rapids: Wm. B. Eerdmans Publishing Co., 1989, 230.)

Jesus said, “As the Father has sent Me, I am sending you” (John 20:21). Every believer is sent by Jesus with the gospel together in community to those in the surrounding culture for the sake of the King and His kingdom.

In order to fuel missional movements across America, believers in local churches need to stop viewing missions as something that happens overseas. They must align themselves with Jesus’ mission in their own neighborhoods and communities.

Decide and Do!
Scroll to top