Is it possible to bring together not admirers, but disciples of Jesus in such a way that every person on earth finds equal opportunity to meet and follow Jesus?

As Kierkegaard pointed out…

“The difference between an admirer and a follower still remains no matter where you are. The admirer never makes any true sacrifices. He always plays it safe.”

What then are varying streams which come together to bring impact from a life devoted to Christ’s call?

John Wesley famously said, “Give me one hundred men who fear nothing but sin and desire nothing but God, and I care not whether they be clergymen or laymen, they alone will shake the gates of Hell and set up the kingdom of Heaven upon Earth.”

An Ethiopian friend prayed, “Dear God, help me to be one of them.”

I wrote Mobilizing Movements with faith that every disciple who breathes this prayer will be empowered to run and “feel His pleasure” (Eric Liddell). Not only that, but also to finish the race knowing that one has given their best towards the completion of Christ’s call, both personally and as part of the global church they have helped mobilize.

Passion and love for Christ, whose indwelling spirit enables us to complete the long obedience in the same direction which Eugene Peterson highlights. On this we build. 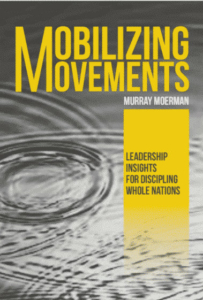 Mobilizing Movements captures and shares reflective learnings from my personal ministry as well as from colleagues in the global mission community in two broad strategic areas.

Much has been learned since the emergence of the “discipling a whole nation” collaboration in the Philippines, envisioned by Jim Montgomery in DAWN 2000 in 1989. Powerful and challenging, adaptations have been made over the decades. Researcher Russ Mitchell studied responses from 100 national process leaders to draw the best applications of their practical experiential learnings. Mobilizing Movements summarizes the outcomes of this study in one of its 21 chapters. The following graphic introduces components which have been refined in the process and are detailed in the book. They are scalable at the city, state, and neighborhood level:

Most national church planting movements of recent decades have focused on replicating the kinds of churches with which we are most familiar. Recently, these are being termed legacy churches, rooted in the Constantinian model of church-as-classroom, where teaching focuses on discipleship in response to biblical knowledge. Globally, great numbers of congregational churches have been planted and millions of lives have been transformed through their witness.

Through church planting movements, we’ve kept up with population growth but generally not moved beyond it. In fact, the Gospel today impacts about one-third of our global population – the same proportion as one hundred years ago. And COVID is not helping. Traditional church plants have slowed during COVID.

During this same season, from another source, micro-movements emerged, commonly known as disciple-making movements. In contrast to the “whole nation” strategy, these movements can be characterized as bottom-up: ordinary disciples engaging small groups in social networks with scripture resulting in disciples-making-disciples who make disciples. The goal is not one spiritual generation but four, or even better, ten or twenty-five spiritual generations.

Yes, it is possible! And it is happening. A recent study has shown how such movements are actively advancing into every religious grouping at rates beyond population growth through the lives of ordinary people. We can see and engage in multiplicative growth in our challenging season of history. Yes, all of us, in all cultures, including those which are increasingly oral cultures. Here is a depiction of some components common to micro-movements:

Top down, bottom up – take your pick

Christ’s call to restore his Father’s fallen world is not a call directed to one class or kind of disciple. Mobilizing Movements begins where you are. You may feel that your influence is largely limited to your family circle, small group, social network or part of a small people group.

In either case, macro or micro, there is inspiration and practical help for you.

Growing as we go

Part of the leadership journey involves reflection on what we are learning from our own steps and missteps, as well as the willingness to learn from those who have gone before. At age 45, I suffered a serious burnout episode. During my recovery, I learned that vision and love, passion and focus, while vital in themselves, can still fall short. It became necessary for me to learn from others as well as from my own innate weaknesses.

Mobilizing Movements is for those who have come to value being reflective practitioners.  Those who run with my Ethiopian friend’s prayer for empowerment on their hearts are continually learning from history and culture and adapting. Reflective practitioners today, like the first disciples and those throughout church history, learn not only in success but also in degrees of failure and resulting adaptation. And we can all benefit. We can grow healthier as we labor and become more effective. It’s not an either/or choice. On the mountain we gain vision; in the valley we gain maturity.

Paradigms are changing, and change requires discipline, patience and love. But it’s worth it. And there is a path forward.

Can you see it? It is rooted in scripture, mission history, self-understanding and practice. God – who sees the end from the beginning – is at work. God calls all of us who are satisfied not to admire Christ but to follow him, to take our place in the cosmic battle for the transformation of individuals and subsequently culture, which flows from Christ. The ascended Christ is pushing back the darkness, not just in a human project of strategic engineering but through God’s power.

In this divine dance and sovereign strategy, you are called to leadership. You are called to take charge – to use the image of Nehemiah’s call – of building your part of the wall.

My dream for Mobilizing Movements is that those whom Christ has called to leadership would be linked together – not in a human organization but in their hearts – with him who calls us and is faithful and will do it (1 Thess. 5:24). As a young church planter in a time of distress, these words of scripture on the lips of my bride became my life’s verse and have repeatedly been proven true.

I invite you to read Mobilizing Movements with an ear to the voice of the Lord of the Harvest, believing that he will reveal a vision which requires a depth of trust and a walk with him capable of inserting the perspective of eternity into the work of our day.

Who is Murray Moerman?

Essentially, I’m a grateful disciple – like many of you reading this blog – one who has tried to respond to Jesus’ call to make disciples and multiply churches.

Ministry: I’ve planted, pastored, mobilized the national church for church multiplication in Canada and sought to do the same in Europe, and from there, through a network of disciples linked through the Global Church Planting Network.

Influences: My family roots reach back to the soil of Dutch Calvinism and I’m ordained in that tradition. At the same time, my heart was first touched during a D.Min. by people like Peter Wagner at Fuller Seminary and by passionate practitioners like Jim Montgomery of Dawn Ministries. Soon after, by David Watson who birthed an early steam of the disciple-making movements impacting mission deeply today.

Personally: I’m the happy father of five married adult children and grandfather to eleven grandchildren. Carol and I celebrate the gift of 45 years of marriage.

Seven Ways to Reduce the Tension of Expectations