Should Churches “Stay the Course”? MT1

You are here: Home1 / Blog2 / Missional Church3 / Should Churches “Stay the Course”? MT1

WASHINGTON – For nearly four years, President Bush has repeatedly vowed to stay the course in Iraq and portrayed his critics as cowards who want to “cut and run.

Since the war began in 2003, Bush has used the phrase “stay the course” 60 times and has mentioned cutting and running 39. But the sobering report of the Iraq Study Group now asks Bush to do the very thing he has criticized: to dramatically change course
The report, issued on the same day that 10 more American troops died in Iraq, paints a bleak picture

“The situation in Iraq is grave and deteriorating,” it says, declaring that Bush’s approach has failed.

“Current U.S. policy is not working,” the report says. “Making no changes in policy would simply delay the day of reckoning at a high cost.

James Baker, the co-chairman of the panel and a longtime friend of the Bush family, put it this way: “We do not recommend a stay-the-course solution. In our opinion, that is no longer viable.

As we consider President Bush’s “stay the course” strategy in Iraq – and the harsh criticisms of the recent Iraq Study Group – I am challenged by the parallels to the church in America.

‘Stay the course’ is failing.It appears obvious that the strategy being implemented by the American church is losing ground. To borrow from the words of the Iraq Study Group report – The situation in the United States “is grave and deteriorating.” 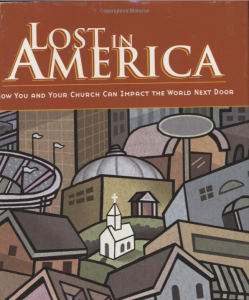 The Western world is the only major segment of the world’s population in which Christianity is not growing. The percentage of adults in the United States who attend church is decreasing. According to George Barna – “There has been a 92% increase in the number of unchurched Americans in the last thirteen years. In 1991 there were 39 million unchurched Americans compared with 75 million currently.” (2004) www.barna.org

In Lost in America, Clegg and Bird state: “The way Christians do church today is the equivalent of ignoring millions of desperate, but unrecognized, cries for help. We’re letting an increasing number of our neighbors and friends die without a personal exposure to the life-giving good news of Jesus Christ. Unless we make some drastic changes, many people are likely to perish, and we’ll fail in the mission of what God has called us to become and to do.” (p 15)

Should the church simply “stay the course”? Is that option even viable? Absolutely not.

As my friend Mike Livingston emphasizes – we need more boots on the ground. This doesn’t mean that we need simply to deploy more professional pastors, but rather we must train and deploy every Christ follower for the mission – to be missionaries in their neighborhoods and workplaces. Just think what could happen if churches became missionary training centers all across this country?

It’s time for Missional Transformation. This is what the church in America desperately needs. Missional Transformation is a process of discovery that begins when believers recognize their responsibility before God to align themselves (passions, desires, behaviors, habits) with the missionary purpose of Jesus. This transformation is fueled by a passionate, fervent commitment to the knowledge of the glory of God filling the earth as the water covers the sea (Hab. 2:14). Missional Transformation requires a shift away from “doing church” in ways that are familiar and even comfortable to actually “being Jesus” to everyone! This process of discovery will require an abandonment of many pitfalls of Americanized Christianity including attractionalism, dualism, internalism, duplicitism, clericalism, infantilism, consumerism, and mega-ism. (I will be posting on these pitfalls over the next week.)

Let’s not “stay the course” any longer. May the church in the US become all that God designed the church to be!

A Look Back at Wolfgang Simson’s 15 Theses

MT1 – From Assignment to Alignment MT2
Scroll to top