Disciplemaking: The “With Me” Principle 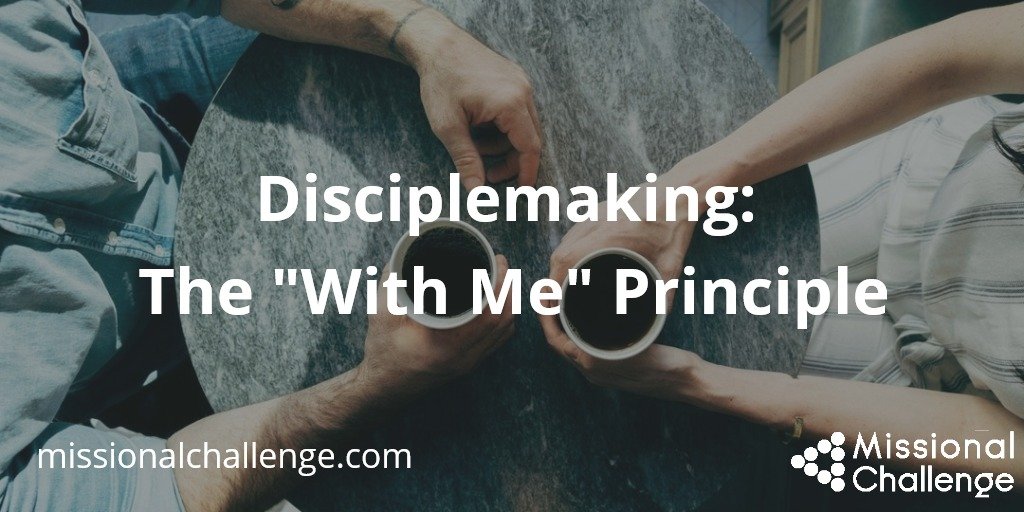 After I got married, I was still going to grad school. So during the summer I needed to get a job. My good friend Doug Rens was a framer for Lee Bolin Builders. He read the blueprints and laid out the houses as they were being framed.

I didn’t know how to read blueprints. I didn’t really even know how to swing a hammer. But I needed a job. So Doug arranged to hire me to work with him doing lay out.

He made sure I had a good hammer and work bags, and even gave me an old pair of his work boots. And with that I was ready to become a framer.

Doug was a great teacher. He didn’t sit me down over coffee and teach me how to read the blueprints, or the difference between 16s and 8s. He just took me to work with him. I spent time with Doug. I watched what he did, and he showed me what to do next.

At the end of the first day – I was dying. We started at 7am out in Thousand Oaks – which was about 45 minutes from my house. It was hot. I had blisters on my feet and on my hands. But I learned a lot.

Over that summer, I got pretty good at framing houses. I learned how to read the plans and so much more. I learned things on-the-job that I never could have learned in a classroom. I caught an awful lot from Doug because he spent time with me.

The “With Me” Principle

If we watch how Jesus made disciples – Peter, Andrew, James and John spent time with Jesus. This was the essence of His disciplemaking strategy: spending time with Jesus!

Robert Coleman in The Master Plan of Evangelism notes this “When one stops to think of it, this was an incredibly simple way of doing it. Jesus had no formal school, no seminaries, no outlined course of study, no periodic membership classes in which He enrolled His followers. None of these highly organized procedures considered necessary today entered at all into His ministry. Amazing as it may seem, all Jesus did to teach these men His way was to draw them close to Himself. He was His own school and curriculum.”

We see Paul doing this several times in the letters that he wrote in the NT. He writes in Phil 3:17 – “Brethren, join in following my example, and observe those who walk according the pattern you have in us.” And in 1 Cor 11:1 he writes, “Be imitator of me, just as I also am of Christ.” And in 1 Cor 4:16, “I exhort you therefore, be imitators of me.”

If you don’t spend time with Jesus, you are never going to make disciples of Jesus. If you’re not following Jesus, you’re not going to help anyone follow Jesus.

Yet at the same time, you may be following Jesus, spending time with Jesus, worshipping Jesus, reading the Bible, and praying all the time, and you still won’t make disciples if you don’t spent time with people who don’t know Jesus.

1. You have to spent time with Jesus.

In Mark 3:13-14, “And He went up to the mountain and summoned those whom He Himself wanted, and they came to Him. And He appointed twelve, that they might be with Him and that He might sned them out to preach.”

1. This was Jesus’ priority – Mark 1:352. You cannot grow in your faith without being with Jesus.3. You can’t be a disciplemaker if you don’t spend time with Jesus.

To spend time with Jesus each day – it’s helpful to have three things:

1. A Time – just as being here on Sundays is a regular time in your week, you should also plant a time to be alone with God. Consider – when is the best time for you to spend time with Jesus each day?

2. A Place – If possible, choose a place free from distractions to be with Jesus. Where is the best place for you to meet with Jesus?

3. A Plan – I’ve tried a lot of plans since I became a Christian. I really enjoy SOAP Journaling and I’d encourage you to try it.

It’s interesting, in Acts 4:13 we read, “Now as they observed the confidence of Peter and John and understood that they were uneducated and untrained men, they were amazed, and began to recognize them as having been with Jesus.”

Jesus spent a lot of time with His disciples.

Robert Coleman notes this: “The time which Jesus invested in these few disciples was so much more by comparison to that given to others that it can only be regarded as a deliberate strategy. He actually spent more time with His disciples than with everybody else in the world put together. He ate with them, slept with them and talked with them for the most part of His entire active ministry. They walked together along the lonely roads; they visited together in the crowded cities; they sailed and fished together in the Sea of Galilee; they prayed together in the deserts and in the mountains; and they worshipped together in the Synagogues and in the Temple.” (p 43).

2. You have to spend time with lost people.

If you are committed to following Jesus, you have commit yourself to helping others follow Jesus. To do this, you have to spend time with lost people.

In many churches, the longer someone has been a Christian, the fewer non-Christian friends they have. My friend Tom Clegg says. “If you don’t have friends outside the church, there’s something wrong with you—and your version of Christianity.”

Here’s why this is so tragic: Christians fail to have any spiritual impact in extending the kingdom and non-Christians go to hell. Neither of these is good – especially the part about going to hell.

In American churches, far too many Christians have few, if any, lost friends. They have lots of acquaintances, but not many lost friends. This was a real problem in my life when we moved up to Seattle. I instantly made friends at our church, and with my colleagues here, but it has taken work and effort to make friends in my neighborhood and in this community.

If you are going to be serious about making disciples, you need to spend time with non-disciples (non-believers). You can’t make disciples if you don’t hang out with non-Christians and become their friends. One of the things I love about Jesus is that the Bible records in Luke 7:34 that He was a friend of tax-collectors and sinners.

In Matthew 9, Jesus is at a party at Matthew’s house with all of Matthew’s friends and the Pharisees ask His disciples, “Why is your Teacher eating with the tax-collectors and sinners?” Jesus said, “It is not the healthy who need a doctor, but the sick. But go and learn what this means: ‘I desire mercy, not sacrifice.’ For I have not come to call the righteous, but sinners.”

In Luke 19, we see the same thing when Jesus goes to Zaccheus’ house and the religious leaders get upset. “He has gone to be the guest of a man who is a sinner.” I love that!

Some Christians in your church may get upset that you are hanging out with sinners, but don’t worry about what they think or say. You are in good company if you are a friend of sinners. That’s what they said about Jesus.

Why did Jesus spend time with lost people?

If you are not spending your time with Jesus and with lost people, then you will never make a disciple!