Rethinking the First Five Years of Your Church Plant

You are here: Home1 / Blog2 / Church Planting3 / Rethinking the First Five Years of Your Church Plant

Patience has rarely been a defining attribute for church planters. I’m speaking, of course, about “friends” I’ve known who are church planters…never, not me, nope. Anyway…

As church planters we rarely have patience. Particularly those who move into a new city or community to launch something from scratch. The ideal we have is that as we hit the ground we do so with a flurry of activity as we seek to will a church plant into existence (just like Lavar Ball willed into existence the Lakers picking his son Lonzo with the #2 pick in last year’s NBA draft).

Church planters assume (or feel as though) the one thing they lack is patience. They don’t have time for it. Besides, as soon as they step foot onto new soil, the clock begins ticking. It’s like (in the minds of most church planters I know–as well as from speaking from experience) we’re planting a church with an NBA shot clock. As a result, timelines are sped up, relationships are forced, and when the clock starts ticking down…5-4-3-2-1! –church planters then move into desperation mode and end up chucking up ill-advised 3-pointers.

Money, or the lack thereof, in the end becomes the defining element in church planting. What inevitably happens is: Church Planter A moves to City X and the shot clock begins immediately because the planter only has funding for 3+ years (or less). Those who’re really good at raising funds (and sustaining them) might extend the shot clock a bit. To drum up or keep support, church planters hype up local demographics and “unchurched” stats. Words like “darkness, “hard soil,” and “unresponsiveness” are used to communicate to supporting churches and partners of the need to extend the shot clock…and maybe (for the fortunate ones) to reset the clock. Besides, what does a supporting church in rural Indiana or Georgia really know about your community other than what you tell (or hype up to garner more support and sympathy for lack of momentum).

What a horrible, depressing, and self-defeating way to plant a church. While we all parrot “success” rates of church plants from years 3-5, it’s not until after year 5 when the attrition rate ramps up exponentially. That’s when funds are officially gone, your young toddlers are out of diapers and into elementary school, and the growing needs of your family are clamoring for attention (and rightly so).

So what do you do? What advice would I give to church planters just starting off? Particularly those who’re moving into a new community and parachute-dropping in alone…

Don’t try to actually plant until you’ve been there a good 4-5 years. Why? You don’t know anyone, you don’t really know your city, and honestly it takes a long time to build “real” relationships and become established. If not, you’re just another creepy church planter desperately initiating conversation in coffee shops like a drunk dude hitting on ladies at a singles bar. Oh, I know, because I did that (not the bar part). I’d talk to strangers next to me at the coffee shop, leave my business cards on the table after I left (hey, it did get us one new core team family), and so on. I was out of my element, out of my comfort zone, and being incredibly unnatural (and awkward). And you know what? It didn’t work. It doesn’t work.

Obviously everything is different if you already live where you’re planting. Now that I’ve been in Portland for 7 years, I feel like now would be the time to plant. I have a lot of relationships, friendships, acquaintances, and a growing social network. Surprisingly, it wouldn’t really be that hard (but that’s a conversation for another day). When I was a church planting strategist I’d say by far the most effective church planters were locals … they grew up there, had ample relationships, and could easily tap into their social networks…and they did.

When it comes to rethinking the first 5 years of your church plant, here’s what I’d highly suggest, implore, and beg of you. This is not an exhaustive list nor a step-by-step process:

Ok, either I’ve offended you or endeared you. But I know you. I am you. I also speak from  experience. I also know the 20-something year old version of me would totally blow this off as I would’ve thought, “but I will be the exception.” Even the early- to mid-30-something year old version of me might have at least listened and pondered…but in the end I would disregard it and think to myself, “but I will be the exception.”

In the end, the choice is yours. My heart is to see you send deep roots into your new home. More than that, to start a church and do so in a way where you’re around long-term (unless you’re wired to be a continual starter).

How are you cultivating the soil, building relationships and starting a church that will thrive beyond 5 years? 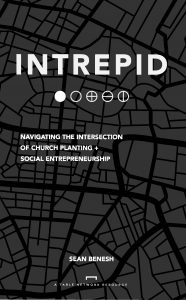 The landscape of church planting is rapidly changing right before our eyes. In response to the fluidity of the culture that surrounds us, church planters are needing to think differently about how they should approach their calling. Rather than asking, “How do I plant a sustainable church?” many are beginning to ask instead, “How do I become sustainable as a church planter?”

Enter social entrepreneurship. Intrepid is about combining the twin forces of church planting and social entrepreneurship––where the gospel is proclaimed and lived out, where neighborhoods and communities find new hope for the future through job creation and economic development, and where church planters create avenues for long-term sustainability.

The goal of this book is to set the course for a new way forward for church planters. Regardless of the cultural and societal contexts church planters find themselves in, how well are they being equipped and trained for the tasks at hand? What skills and tools are they missing that would help them meet these new challenges? The changes taking place are so fundamental that we even need to redefine who or what a church planter actually is.

Cultivate the soil. Plan for the long term. Delay starting worship services until you’ve actually lived in the community for 4-5 years.

The End of Procrastination
Scroll to top